Interior designer Liz Nandee says everything she learned at the College has influenced her career.

Liz Nandee has designed sets for Oprah, Kim Kardashian, Hillary Clinton, Barack Obama, Ellen DeGeneres, and Michelle Obama. Today, Avenue Magazine has named her among its Top 40 Under 40 Class of 2019. But back in 2000 and 2001, she was a student in Bow Valley College’s Interior Decorating Certificate learning about colour, textiles, lighting, form, and function.

Before she celebrates her top 40 win in November, Liz wants to thank the College for the opportunity to get into the industry. “It has significantly changed my life,” she says. “I am forever indebted.”

Liz, who in addition to celebrity design, does set, event, residential, and commercial design, says everything she learned at the College has influenced her career. “It was my first stake in learning about design and decorating,” she says. She remembers enjoying listening to the instructors talk about what you can do in this career and how creative you are allowed to be.

Liz knew she wanted to be an interior decorator from the time she was in high school. She remembers the “aha” moment when she realized the field was for her. As a teenager, she would volunteer for a lot of organizations, and she was a student ambassador for Kids Help Phone. The non-profit ran an event called the Designer Showcase, where a house was redecorated by the city’s top designers and opened to the public for tours to raise funds. Liz says it was the way one of the rooms was designed that made her realize interior design was exactly what she wanted to do. “Right then and there is when I decided I'm going to start figuring out how to do this.”

Today, she says giving back to the community is the most rewarding part of her career. “I believe everyone, no matter what your background is, should have a well-designed space,” she says. “Once your space is not chaotic, it expresses who you are. You’re able to do your job or you’re able to do things better.”

We wish Liz every success in her future endeavours. 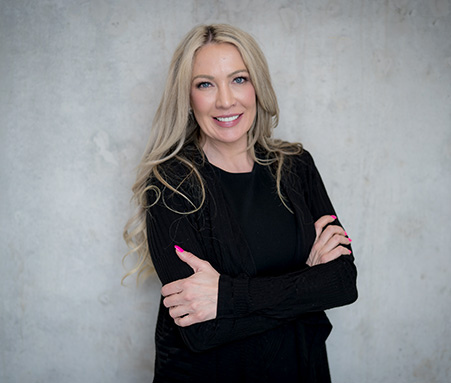 In Rachel Evans' class, students tweet, podcast, and talk on Slack - just like they will at work.