Our Stories / A clear vision

How the support of colleagues kept Alaine Burton working, and helped build the Practical Nurse program.

Five years ago, Practical Nurse Diploma instructor Alaine Burton started going legally blind. She has since had two corneal transplants and now has perfect vision, and says was supported every step of the way by her family at Bow Valley College. “I was able to work a lot longer in my situation than I would have anywhere else,” she says. “I wasn't safe to do lab, I certainly couldn't go to clinical, so [the College] allowed me to teach anatomy and physiology in the classroom. It was something that I knew well and I didn't need to do a lot of reading and prep for.”

But perhaps Alaine wasn’t surprised by the College’s response to her condition. It was a history of support like this that brought her here as an instructor in 2006.

Alaine was a Practical Nurse student at the College in the mid-1990s. Before applying to the program, she had planned to go to university, but found out she was expecting, and thought Practical Nursing would be a more manageable stepping stone to her desired destination. She says she couldn’t have succeeded without her family’s support, and that the College supported her so much, she came back here as instructor. “The instructors were so patient and knowledgeable. They became who I wanted to be, which is why I’m back here teaching.”

Throughout her time here as an instructor, Alaine has been instrumental in expanding the Simulation Centre, a place at the College that simulates real-life medical scenarios using mannequins. During the expansion, she and her colleague Diane Valiquette grew their simulation training faculty by two thirds in eight months’ time and hosted education training sessions. Alaine says that in health care, simulation is the answer to a lot of questions. “As an instructor, when you watch a team of learners go through a simulation, you realize that experiential learning, there's nothing that matches it. It’s a safe place where you can make a mistake and it's not going to negatively impact anybody.”

There’s no sign of negative impact in Alaine’s experience at the College, though. She shares that when she was blind, it was when she went away to a conference that she realized how much she relied on her colleagues here. For example, they would pour her a cup of coffee because she couldn’t do it herself. While at the conference, when she went to pour herself a beverage, she missed the cup entirely. “That’s when I realized how much my team here was supportive. It wasn't until I was away from this team that I realized how blind I was.” 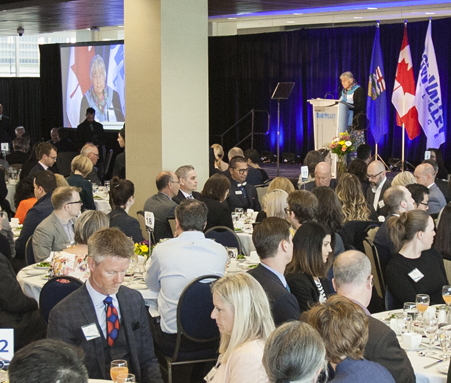