Our Stories / How Justyne Milman fell in love with disability studies

How Justyne Milman fell in love with disability studies

The Bow Valley College graduate says diploma made her a better mom and a better person.

In 2010, Justyne Milman, a 19-year-old living in Calgary, gave birth to her daughter, becoming a single mom. Six months later, Justyne found out her daughter was blind. Eventually, she would learn she has part-dwarfism.

Justyne hadn't graduated from high school, so for the first four years of her daughter's life, she was working odd jobs like waitressing. But when her daughter was old enough to start school, Justyne realized she didn't want to tell her daughter about the importance of school when she hadn't finished school herself. In 2014, Justyne enrolled in High School Upgrading at Bow Valley College and in 2016, she received her high school diploma.

"After that, I just wanted to continue," says Justyne of her educational journey.

Justyne realized that she wanted to pursue something she cared deeply about, an area of study that hit particularly close to home. She chose the Disability Studies Diploma.

As a parent of a special needs child, she found it overwhelming to navigate through the support programs for parents of children with disabilities. Not only did she learn about the support available to her, Justyne "fell in love with the program," she says.

"Going through the disability studies program, I was able to learn positive approaches and understand [my daughter's] condition and her behavior. Bringing that home, I'm able to work better with her because I'm not looking through the lens of a parent. I'm looking through her lens."

One of the ways Justyne improved her understanding of her daughter's condition was through three practicums she completed at the College. Her first placement was at Renfrew Educational Services as a child development facilitator, where she worked one-on-one with children with special needs. Her next practicum was at A.E. Cross School, a junior high school, where she was an educational assistant. Lastly, she was a support worker at the Calgary Scope Society, a non-profit agency devoted to improving the lives of people with developmental disabilities in Calgary.

As soon as Justyne finished classes at the College in April 2019, she got a full-time job at the Calgary Scope Society, where she had also completed her final practicum. In September of this year, she returned to Renfrew Educational Services as a child development facilitator. As a staff member, she can supervise the children by herself, which she couldn't do as a student.

In her personal life, Justyne can now confidently find her way through the programs available to herself and her daughter, which was her goal with enrolling in the Disability Studies Diploma. She wants to thank the instructors for helping her achieve that. "I felt like the teachers understood what I'm going through. They had already worked with parents like me and had worked for so many years with children living with a disability that they were able to give me advice that I haven't ever heard." 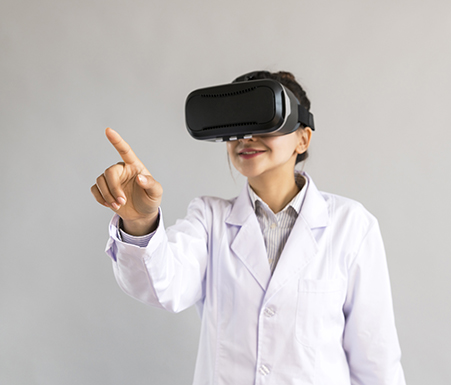 The application of artificial intelligence in the healthcare industry is a growing trend, and Bow Valley College is embracing this evolution in its Practical Nurse Diploma program.