Our Stories / Lessons from Kwakwani

Rhoena DeHaan has been passionate about education from a young age.

Rhoena DeHaan is passionate about education. The instructor and practicum supervisor in the College’s Early Learning and Child Care programs has been a teacher from a young age.

Now, DeHaan is leading the Guyana Educational Society, a non-profit organization that supports an early childhood educational initiative in Guyana. “I strongly believe that with education, we can help our society and the world in which we live,” says DeHaan.

DeHaan came to Canada from Guyana in 1981. Since then, she had been teaching preschool and college here. But every year, she would go back to Kwakwani and see that the community desperately needed a high quality early childhood centre. So, in 2014, she re-mortgaged her home and made plans to build the new facility.

Using the funds, DeHaan could afford what she needed to open the centre. She bought an army truck to transport the building materials to the centre, and hired people in the community to build the structure and the furniture. By January 2015, the childcare facility opened to 16 children ages two to three.

Afterwards, Janet Steeves, a fellow Early Learning and Child Care instructor, wanted to help out, knowing that DeHaan couldn’t continue to do this by herself. Steeves and her husband, Quentin Krogstad, started to collect donated items for the centre, including school supplies, children’s books, and art materials.

That same year, Bow Valley College came on board when DeHaan and Steeves took 10 learners from the Early Learning and Child Care and Education Assistant programs on an international practicum to Kwakwani. The practicum involved working in four early childhood settings. By 2016, DeHaan was ready to take a second group of learners to the community. The 2016 learners said when they arrived, the neighbourhood children came to meet them to play with the skipping ropes, balls, and other toys they brought. The learners and children repeated this play every evening. This was one of the highlights of their experience.

In 2016, DeHaan’s initiative obtained charitable status, and became the Guyana Educational Society. The non-profit is currently fundraising to buy a bus to take the children who have a long walk to school. DeHaan also hopes to take another group of learners to Kwakwani for their practicum by 2018. 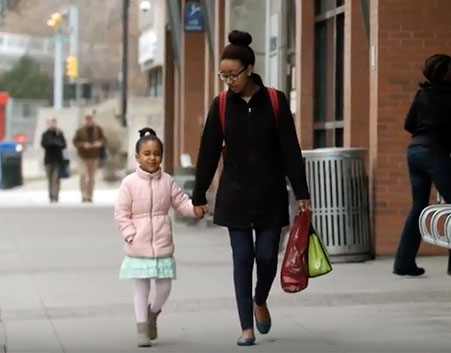 She had the courage to overcome obstacles - just to go to school. Donor support has kept her on track to be successful.

Converse graphic designer Wes Niven looks back on how he got his start in the Artstream program.